This week Mark Zuckerberg and Priscilla Chan, his wife, announced that they would be donating a large percentage of their fortune to charity over the course of their lifetimes- roughly 99% of their Facebook shares or about $45 billion. This announcement came in the days leading up to the birth of their first child and was delivered as an open letter to their daughter. They framed their announcement as part of their vision for the better world they hoped for for her in her lifetime and to many this was heralded as a generous and selfless decision. And maybe it was to a certain extent. But by putting their money into an LLC, which is what Zuckerberg and Chan have announced they are going to do, they will avoid paying a large sum of taxes on their enormous fortune. So what might the real effect of their decision be, and in particular what could it mean for the state of education in the United States?

END_OF_DOCUMENT_TOKEN_TO_BE_REPLACED

Funding to education-technology companies is booming from $259M in 2010 to over $1563M in 2014. Overall, there is more than a 503% growth rate in educational investment during the period from 2010 to 2014. In first quarter of 2015, there is a new high record with a total of $641M investment. However, the amount of deal has fallen from 194 in 2014 to 158 in 2015, which probably indicates that investors has reconsider the investment decisions in the field of education, they are more inclined to invest in the later stage instead of investing in early stage. END_OF_DOCUMENT_TOKEN_TO_BE_REPLACED

Friends of the Blog!!! 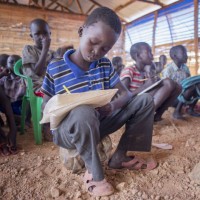 Conversations From The Bench

A participatory documentary project for social change. Come sit with us...

the world of early childhood

Education in Conflicts and Emergencies

Fresh Perspectives and Analysis on Educational Issues Around the World

The Art and Craft of Blogging

The latest news on WordPress.com and the WordPress community.